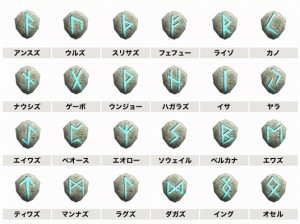 Do you know Rune alphabet? It is made up of 24 letters, and used 20 centuries ago.
Each letter is believed to have special power.
People in ancient time were worshipping Rune as spiritual symbol.
Let’s learn about it and know its mysterious power.

10 things we want to know about Rune

Before knowing its power, let’s learn little bit about Rune. I said that Rune was actually used, but where?
It was originally used among Germanic people, and Nordic people and English people also started to use it. It was widely used alphabet back then.
By the way, there is evidence around us that shows Rune was flourishing letters.
It is alphabet. There are many letters in common between Rune and alphabet we use now. For example, “H” has very much in common.
This is because Rune was used in old English. In around 7th century, Latin alphabet became popularly used and Rune gradually disappeared.
Part of Rune is still used today in Icelandic.

There is a tale about Rune in Nordic myth.
The god of knowledge in Nordic myth called Odin was ambitious for seeking knowledge.
He did not mind of any loss, and he once gave away his eye. One day, to discover the secret of Rune, he hanged himself from a tree of Yggdrasil for 9 days and nights, pierced himself by spear, in a sacrifice to himself.
He eventually receives secret of Rune with magical power, and his life is also saved as the rope broke.
This is how Rune was spread into the world.

Take a look at Rune. Do you see that most letters are made up of only straight lines? This is because ancient people were carving letters on woods or stones with knife.
We can imagine how difficult it is to engrave curved lines on hard surface with a knife. People carved Rune on house or weapons to have power of Rune.
Therefore, Rune is basically “engraved”. Also to avoid being hidden behind wood-grain, no horizontal lines are used.
Only diagonal and vertical lines.

-When Rune is effective

There is a time when Rune is effective. It is when Rune is engraved to the highest point of the effective object. You probably can’t understand, but you will when you know the meaning of Rune. When meeting all following conditions, Rune is most effective.

Dyeing: dye the Rune and understand its meaning

It is impossible to offer sacrifice though, so for us, dyeing is good enough for Rune to have its power.

To begin with, prepare something to carve, like a carving knife. Next, prepare something to carve on to. Stone is difficult to carve with normal knife, so wooden plate is recommended. You will eventually wear it, so the size should be small enough to fit in a pocket.
Now, carve Rune. I will later talk about which Rune to engrave.
Of course you can decide for yourself. Then, color it. You can use anything that can color. Use dye with a brush to color lines of carving.
Finally, pray for it to have power. Place your talisman in center of a room and pray as you imagine gods of Nordic myth.
Now you have complete talisman. Put it on your bag or put in your wallet and always carry it with you.

The important thing is to think about meanings of letter while you make it. Your desire will be naturally put into talisman and you will feel more passion to it.

As I said previously, I will introduce you recommended Rune easy to use. First is “Tir”, origin of letter “T” in modern alphabet.
This is called Rune of “victory” and it has a meaning that you can win a battle if you try with courage.
It also represents war god Tir in Nordic myth. Use this Rune when you need to challenge.
Use it when it is the time and it will back you up. Ancient fighters engraved this Rune to their sword and colored the letter with enemies’ blood to gain power…fearful story.
The next Rune is “Wynn” or also read “Wynjo”. It looks similar to “P” in modern alphabet, but it is an origin of “W” in our alphabet today.
This is called the Rune of “happiness” and it means you are filled with happiness or happiness will come to you.
Use it when you have a wish you want to make true.
Also even if you don’t have a wish, it is good to engrave to talisman because it means the arrival of happiness.

Now let me introduce more complicated Runes. If you are a beginner, you don’t need to try difficult ones and start with easier ones I introduced in (1). First one is “Hagal”, or also called “Hagaraz”. As you can see, it is an origin of alphabet “H”.  This letter represents “”hail”, and means disaster and misery.
You might think “why do we use this Rune?”. This Rune also has the meaning of “ordeal”. If you get over with the difficulty, you will experience unexpected turning point.
When you feel looming crisis, carve this Rune and it will be a determination to endure the ordeal.
It is effective to use in combination with “Nied” (patience) and “Yr” (defence).

At last, I’d like to introduce “Sigel” or Souil. This is an origin of alphabet “S”. This letter is called the Rune of “Sun” and has meaning of success and glory.
It is also called a lucky Rune and basically means good thing, but there are things you need to be careful when using it.
The strong power of the sun is not something human can handle. Therefore if you use this Rune too much, it will be a burden for your body.
It is better to use it only when it comes to time. When beginners make a talisman, I would recommend you to use letters I introduced in (1).
When you get used to it, find appropriate letter for you from all 24 letters of Rune.

This is an advanced content.
When you combine several Runes, it is called bind Runes. Bind means to tie or bundle together.
Rune artists are actually using bind Runes. By combining several Runes, you can make your favorite design. If you seek for originality, this is recommended.
The famous example is the Hakenkreuz of Nazi.
This is the combination of two “Sigel” I’ve just mentioned above. It means they also believed the power of the Rune.

Rune is also often used for fortune telling. In this section, I will tell you the way using cards.
To begin with, you need to prepare cards. Prepare cards with Rune alphabets.
One letter for each card. You can make them by yourself, but I recommend buying them.
They have beautiful pictured drawn on each card and it makes easy for you to learn meaning of each letter.
Now imagine what you want to tell fortune about and draw one card.
If you can’t tell the meaning with just one card, draw one more. Understand the meaning from the card and that’s it. You can only improve by experience.
Try over and over.

There is an important thing for understanding Rune.
It is “not to be restricted by knowledge”. For instance, there is an explanation “this is a Rune of horse”. Just knowing this doesn’t mean you understand Rune.
Not only ordinary meanings such as symbol of uplifting feeling or speed, you need to have full of ideas.
If you can imagine more, you can make good use of Rune.

What do you think about it?
This article was to tell you mysteries of Rune alphabet. I hope you get interested in Rune by this article. Thank you very much for reading.

10 things we want to know about Rune

The seven ways to tell your love with viola meaning

For people who want skinny calves!7 ways to pretty legs

...
Home
How to raise a fortune
10 things we want to know about Rune