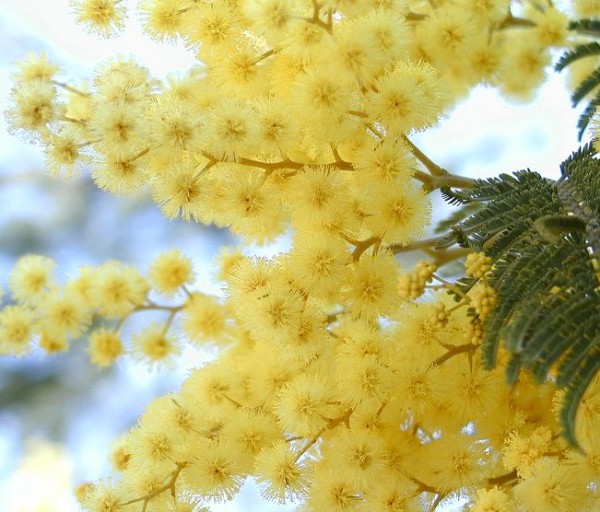 In Japan, acacia mimosa is mostly thought to be silver wattle and Cootamundra wattle.

Mimosa means “sensitive plant” and fake acacia (“Hageshibsri”) which was brought in Japan in the Meiji period was called “acacia”. So silver wattle and Cootamundra wattle came to be called “acacia mimosa”

Acacia dealbata which is imported from Britain or France was called mimosa so today, acacia dealbata or silver wattle is equivalent to acacia mimosa. It is native to Australia and the yellow flowers bloom in early spring. In the south of the Kanto region, open culture is possible, so acacia dealbata was used to be planted as street trees. The contrast of its silverish leaves and yellow flowers is really beautiful.

I will introduce 7steps how to make bloom beautiful acacia mimosa (silver wattle) next year again.

1. Prune away by July

It is important to prune. After bloom, you should prune by July. In summer Floral stems come up. If you prune after that, you might cut off the branches with floral stems which will bloom next year.

And if you want to curb tree height, cut off a trunk to the height you want. Acacia mimosa grows rapidly and its brunches are thin, so they vulnerable to gale. So you should prune overgrown-brunches as soon as possible.

2. Consider where you plant acacia mimosa

You should consider where you plant acacia mimosa first. Since acacia is originally distributed in dried area, it should be planted at well drained places.

And plenty of sunshine is necessary to make bloom. Furthermore, you should not choose windy place because strong wind may break brunches or even a trunk. Leguminosae including acacia is difficult to transplant after grown-up. so you should consider well before planting a young plant.

If you live in the north of the Kanto region, you should grow acacias in flower pots because they are vulnerable to cold.

3. Time of planting and how to plant

Planting time is dormant stage excepting harsh winter time. November, March, May is the best time to plant acacia mimosa. If you transplant large plant, you should dig around the tree to make it easier to transplant a year before transplantation.

Since it grows rapidly, if you transplant from flower pots, they will take root soon. Dig twice the depth and width of flower pots and add one-third of leaf mold to the soil you dug. And mix granular fertilizer according to the instruction with the soil and transplant. In case of ill-drained place, you should add sandy soil. Pour plenty of water around the roots and get the roots and the soil together with a stick.

Young plant’s branches and trunk are vulnerable to wind, so stake is necessary.

Leguminosae’s plants do not always need fertilizer because of bacteria which attach to roots. However, if their leaves do not look good, you should use slow-released granular fertilizer between April and May.

After bloom, use quick-acting fertilizer which includes much phosphoric acid and potash. Originally acacia mimosa grows over 5m. It is possible to gradually make main branches thick by pruning little by little. In such a case, cut some main brunches when they grow to some extent and prune away side branches to make the beautiful shape of tree.

Acacia mimosa is strong in pest. But some stem borers may appear in trunk, if you find wood chip or pest waste around the trunk, you should exterminate the pest by putting wire in the trunk. In winter, you might find shells like cotton on branches or leaves, they are armored scale insects. You can remove them with a brush in initial phase, if there is too much the pest, you should cut off the branch.

And you should prune once in a while to make the tree well-ventilated. Armored scale insects eat tree sap and its waste on the leaves cause mold and sooty mold.

6. How to seed and multiply

Seeding is important to multiply acacia mimosa. From September to October, pick up seeds and scatter them. When pods turned brown, take seeds out of pods and scatter Akadama and cover seeds with soil to 1cm high and water them well. In case of seeding in the next year spring, put the seeds and wet sands in plastic bag in order not to get dried and seal it, and store it in fridge.

First, put the seeds in 80-degree hot water. Secondly, put them soak in cold water for 12~48 hours. It will help seed sprout. According to the kinds of seeds, it will sprout in a couple of weeks. And plant them where you want in fall.

7. How to grow acacia mimosa in flower pots

If you use a large flower pot from the beginning, it makes it harder to take roots because it is hard to dry. You should choose where the plant can get plenty of water and is well-drained and the plant is rarely exposed by gale. You do not have to be careful about which soil you use but acacia mimosa is vulnerable to cold so you should be careful about cold wind.

I think you would understand acacia mimosa (silver wattle) is not difficult to grow in the south of the Kanto region as long as you prune once in a while and choose the right place to plant.

Since it is native to Australia, acacia mimosa likes warm climate. So it is also important to care about temperature and well-drained. Its language of flower is friendship. Build a good relationship with acacia mimosa and make bloom next year.

1. Prune away by July
2. Consider where you plant acacia mimosa
3. Time of planting and how to plant
4. Stake and fertilizer
5. Plant sick
6. How to seed and multiply
7. How to grow acacia mimosa in flower pots

7 points to recognize the man who does not cheat

7 tips How to Choose Cool Clothes for a Short Man

7 ways peony gives you how to become a graceful woman

7 habits you should know for how to get taller