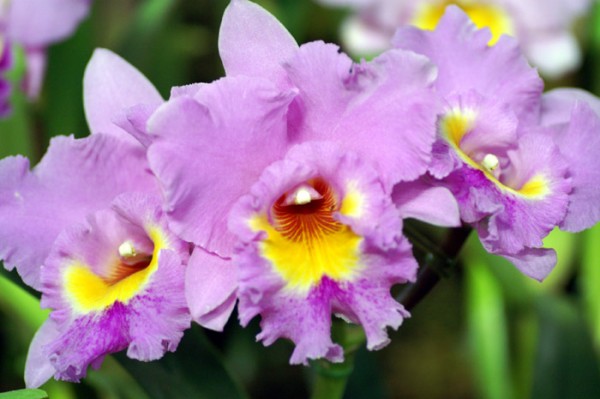 It is distributed over Colombia, Venezuela, Brazil, Ecuador of Central and South America and it grows in the forest area of 100m – around 1,500m above sea level such as the Andes in particular and attach to the bark of the mind because it is an aerophyte and live.
Because it is one plant including the mating kind with one genus of the Orchidaceae plant native to Central and South America or closely related family, and the flower is beautiful, it is well cultivated and, with the most famous Western orchid, is said to be the Queen of the Western orchid!

It is treated as a pronoun of the Western orchid with a showy flower in a large flower very much and there are now many crosses and is cultivated and directs the splendor and sense of quality for cut flowers!

It stick to the bark with a white, big udon-formed root to go out of the knob of the creeping stem and live a life. The flower goes out of the tip of the false corm, and the petal with onw – several greatly opens and turns to the front, and the one which a lot of pink things are very gorgeous from white, and is beautiful features the color!

From the flower language of the elegant woman

To write it, and it is in fun old days whether it is not … woman whom nobody longs for excellently to be beautiful, and it is an image that there is many it, but there is the beauty that is refined, and is not loud beautifully, and is calm to the pure Japanese-style woman of the pattern like a character!

If there is such a woman judging from the same sex, eyes go, and is thinking that you want to become acquaintanceship all the more if it is common to want to talk, and it is a man not often found? It will be more attractive when a graceful woman displays it in a cattleya, and both the cattleya and a woman are wonderful if both become beautiful ☆

From the flower language of the noble beautiful woman

It is a word not to usually see very much, but has a dignified state and the meaning that is said in personality other than social position or family’s social standing being noble highly!

The body is accompanied by the woman whom family’s social standing with ♪ birth was brought up in at all comfortable environment to be good whether it is the feeling such as the young lady said in the world not the born thing which dignified, was made naturally and will grow up to a wonderful woman ♪

It is not a thing made at a stretch, and one of nature is a noble woman and thinks that the state is seen beautifully.

You feel whether both the fruit and a person are the same. As for ♪ person who is the thing which is very delicious when the fruit ripens, the charm of adult who developed is wonderful enough at all a heart and a body!

Because it has the meaning called at suitable time if a heart can afford, and it is different from the youth again, and a feeling having a lot it is good again, and it does things again, it is an attractive part of adult that wait not being advanced slowly and carefully ☆

From the flower language of the magical power

How good it is if human being everybody might have thought once, and there is a magical power to oneself … !as power, that of evil spirit mislead a person according to the letter.

You think that it is power not to enter the thing that it is mysterious power as you do not think that a human being did it, and is bad, but it is the power that you want to use in a good thing by all means.

The mysterious power to attract a person is brought by doing so it. When it is doubtful power … normal with not being able to do it as a person and thinks, scary, it is, but the magical power is how to treat, too ☆

Flower language from an important person

You hear it with “running out of” size well, is it that everybody understands an original meaning? Is the most necessary and is respected; is important. Regard handling as important carefully.

There are many urgent … and meanings, but the pivot is a serious matter most. Meanings are different to like it. I think that there is a big difference with the important person with a favorite person.

Deep feelings appear in a meaning to be important that I want to value simply because it is the person who does not want to lose it. To be only the word to be important not to be born, a person important throughout the life only for favorite feelings ☆

From flower language of dignity and the beauty

If you are a woman, it will be fixed by a living from the small time because dignity and elegance felt by … person and the thing which want to last dignity which is born suddenly!

It is the story that solemnity felt by a thing considerably has difficult. It was in the book, but is knowledge and the culture that dignity “= body of” woman has!

You do not snap at a cheap thing and realize it when you do cool way of life. If you have it, and the attention is elaborate if beautiful nevertheless, it is fearless ♪

From the flower language that you are beautiful

You are embarrassed when said face-to-face. If you are glad, and it is a comfortable thing to assert and is beautiful, is it a lack of interest, which is apt to seem, but is it a mistake?

It is strange to say by yourself, but it entirely changes if an appearance and the inside are beautiful. It is the thing which comes out outside naturally when you make not only the appearance but also the contents beautiful!

When you are too glad and may fall down if it has you say and polish the inside not to mention appearance to a bright shine, how about the words that do not come from wonderful one?

The cattleya is said to be the Queen of the orchid, but the Japanese name says a sunrise orchid and is a flower indicating the noble, overwhelming presence, but is a flower letting a changed feeling of the full dress including a corsage and the hair ornament do it!

You are used with the corsage at the age of record award doing at the end of the year, and the use is various when it is a hair ornament of the hula. Because it is a thing expressing a meaning of respect and the modesty by ceremonial occasion or the ceremony, it is thought to be tightened.

It is outfitting having the origin in Europe in the 19th century that is accepted as formal dress relatively universally and, regardless of a race and a race, is Europe and America origin, but the cattleya which is correct for such a full dress because it is worn all over the world including Japan is evidence loved in the world ♪

7 Ways to Get up Love Using Azalea Meanings

...
Home
Good luck surgery
7 reasons why cattleya is good to a decoration of dress