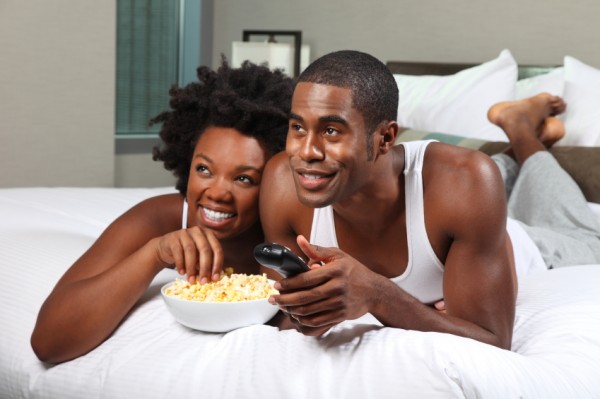 When too hot outside, for example, you don’t feel like going out. It’s tiring and make-up comes off with sweat. Then, how about dating at home with beers, some foods, and DVDs? Clean up your room and spend relaxing time with your partner.

It is a luxurious time to slob around at home from daytime.

It may be enough for you just being with your partner all day, but prepare DVDs to enjoy your date more.

Here are 11 recommended movies for couples, both men and women sure will enjoy!

11 movies recommended for dating at home

You can enjoy beautiful voice of Anne Hathaway! The well-known story Les Misérables, which most of you have read as a child, is made in to a film by the director of “The King’s Speech”, Tom Hooper.

This is the life story of Jean Valjean, who was imprisoned for 19 years for stealing bread from poverty. His dramatic life and relationship with his partner is played in musical style. Anne Hathaway won the Academy Award for supporting actress in 2013. You will be thrilled.

This is the last story of the series! Finally, his son is in a film. You’ll forget the hotness of summer by the craziness of Bruce Willis. Police detective John Mclane finds out that not in good relation and estranged son, Jack, is imprisoned in Moscow. He decides to go to Russia to take his son along to home.

However, the court he was supposed to appear was suddenly cought up in bombing terror… Don’t trust beautiful woman!

Breathing of Sandra Bullock echoes in your brain…This is a controversial movie, but you can’t miss the new filming technique of this movie.

You can experience the thrill and fear of astronaut. It is a short movie, but you will feel great tension.

Yasushi Akimoto and Atsuko Maeda. Sounds exciting, isn’t it? This is a horror film starring Atsuko Maeda and Hiroki Narimiya (also played in “Nobou no Shiro” or in English “The Floating Castle”), under the direction of Hideo Nakata of “Ring” series.

A girl name Asuka moved to a residential complex with some secrets behind it. One day she finds an old man living next to her dying alone. She meets a boy named Minoru and…

Directed and Written by Woody Allen

Woody Allen is famous for romantic comedy for adults. Phrases in his movies are long but beautiful. Please feel the atmosphere of good old Paris in 1920s. Gil and his fiancé are living in Paris.

One night, he was led by the sound of midnight chime, and wanders off into Paris of 1920…

Written and Executive producer by Will Reiser

What would you do if you are diagnosed with cancer at the age of only 27? Jonathan Levine is a genius to make such a serious theme into funny movie! You can’t avoid crying with laughter for crazy things Adam’s best friends do to cheer him up. Friendship of men is deep, just only they don’t say it aloud.

No alcohol, no smoking. Adam, living healthy life, was suddenly diagnosed with cancer at the age of only 27…

This kind of movie is America’s favorite. The story is clever! This is a naughty movie, makes adults excited and breaks dreams of children.

By the way, why is Ted so popular in the movie…? Ted is a teddy bear and best friend with John since he was 8. Now John is 35, quite a good age, and living with a middle-aged naughty bear Ted…

Movies starring Tom Hanks are always good, aren’t they? He can make us thrilled with any character. How wonderful he is. This is a suspense movie based on the true story.

You can’t stop crying, and is definitely different from the famous “captain” of another movie. The merchant vessel Maersk Alabama was suddenly attacked by Somalian pirates. Captain Phillips decides to be a prisoner in change of freeing crews. Captain fights against pirates for his life and…

Recommended for those who have not seen this yet. I can’t say anything but “amazing!” I’m sure many films are made influenced by this movie.

The theme of the story is “chaos theory”, which means the small movement like butterfly’s flapping can eventually makes big difference. This is an explosive suspense of a young man who can alter his past over and over will try to save a woman he loves.

The original story is very interesting too. This is a series of 3 stories, so I recommend you to see all of them. Each character is neatly expressed, and both men and women can enjoy. Scariness of unexpected criminal is beyond explanation.

There are some grotesque scenes, but you will be attracted to the story. Daniel is so cool! This is a mystery which woman genius hacker who hates society and a journalist try to find out the truth about a girl who disappeared 40 years ago.

Directed and Written by Kenji Uchida

First of all, if you have not seen “After School” directed by the same director, please see it before this. It is a milestone of a Japanese talented director, Kenji Uchida.

And this movie, you’ll love it if you like actors Masato Sakai or Teruyuki Kagawa.

Stay sharp until the end! Struggling, poor actor and a hit-man who lost his memory. Lives of two contrasting men are one day switched by accident…

Did you find any interesting movies?

I thought maybe men don’t prefer love stories or stylish movies, so I choose movies above. It is too much to say that how many good movies you saw determines values of your life.
However, it is good to know the world you don’t know with just few amount of money. If you haven’t decided a plan for next date, go rent movies!

11 movies recommended for dating at home

I want a boyfriend, but check these bad habits at first

7 steps for new love after heartbreak

7 common traps for those who think “I want a boyfriend”

7 ideas to let a swinging bachelor want a girlfriend