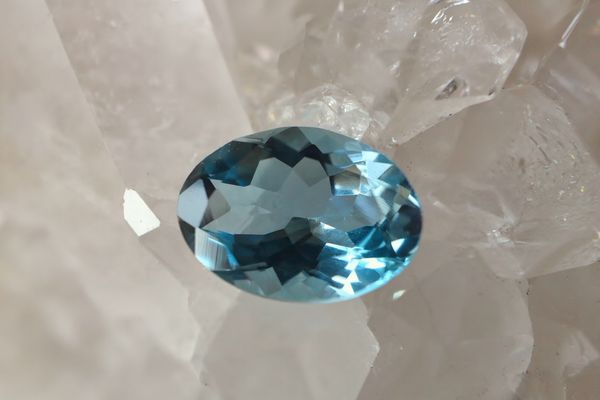 Although you might not be able to make up your mind about which birthstone you should get. But you just need to choose one that suits your feeling. Let’s find the best birthstone that makes your dream come true.

Beautiful blue gem, “Aquamarine” is the most famous March birthstone. The gem is the symbol of calmness, courage and intelligence. It is said that aquamarine has a good effect on communication or singing.

It has also good effect on improvement in romantic luck. It may bring love to lonely women and they might be able to get married.

European in the nineteen century often gave the gem as a romantic gift to their lovers. Aquamarine is also called gem out of mermaid’s jewel box or tears of mermaid.

Bloodstone is a dark green gem with red spots. It is said that bloodstone was on the Hill of Golgotha where Jesus suffered on the cross and Jesus’s blood seeped into the stone. So bloodstone is the gem that has deep relationship with life.

Bloodstone is effective for people who are mentally tired because it gets people psyched up and increase motivation. And it is also said that bloodstone has a good effect on blood disease and pregnancy.

So bloodstone could help you with your life in various situations.

Although coral is not stone, Japanese people love coral since the old times because Japan is surrounded by the sea. There are various colors of coral like black or red. You should not expose coral so long to the sun shine because it is vulnerable to heat and easily get dried.

In Buddhism, coral is one of the seven treasures and good luck charm for perpetual youth and longevity. Coral would increase your vital force and give you creativity because it comes from the origin of the life, “ocean”.

So it has good effect on sterility and child’s growth. Coral that has calm atmosphere is your protective god.

Ruby is generally July birthstone, but it is March birthstone in France. Ruby is a red gem and has a meaning of passion as its impression.

According to Hindu myth, a jealous person in court killed the wife of Maharaja and her blood seeped into a diamond, which is the origin of ruby. It is said that ruby is the gem that gets rid of suspicious feeling about love like jealousy.

It is also used as a good luck charm for keeping disease or poison away and has a meaning of dignity and humanity. Ruby has a commanding and atmosphere.

Amethyst is the generally birthstone of February, but also the birth stone of Pieces. Amethyst is beautiful purple gem that has meaning of honesty and peace in the heart. So it is said that the gem could relieve suffer in the heart or worry.

It has also the spiritual power that prevents misfortune so it is often used for ritual or meditation. According to the Greece myth, amethyst was named after a girl who was attacked by a tiger due to God of alcohol, Bacchus’s flightiness. So it could help you break habits like smoking, drinking or drags.

As a symbol of eternal love, diamond is often used for engagement ring. And it is said that the custom started in the Victorian age. A diamond is believed to lead to happy family.

Blue spinel is hope birthstone. Hope birth stones are artificial gems. They are less expensive than natural stones, but they are still beautiful.

Blue spinel that is dark blue is regarded as a new birthstone of March. It is said to improve immune system and good for disease treatment.

It is also used as a good luck charm for creators because of its feature that generates new energy and has an effect of increase in romantic luck that could bring an opportunity to meet new people. Even New stone has a power.

What a surprise how many birthstones exist. However, everyone who has a birthstone has the same wish that is happiness. You might be not able to choose which birthstone you should get.

However, if you will run into the stone that suits your feeling, you will be sure to feel something different. The stone is also waiting for you. Let’s find the destined birthstone to live a happy life.

7 notes on how to maximize the power of the turquoise.

9 ways for good luck and get together with healing stones

Is a crystal bracelet effective? I comment in detail☆