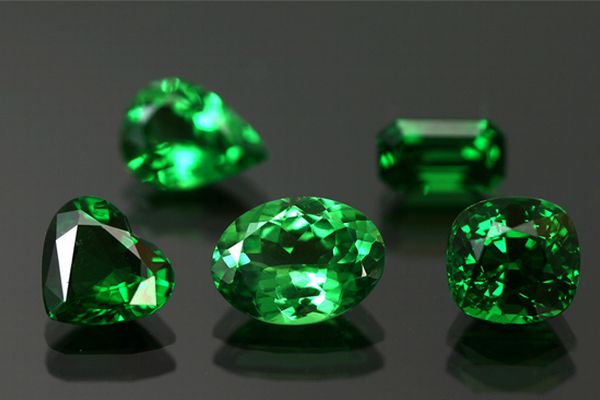 “The garnet” is famous as a stone amulet for an easy delivery of January. “The garnet” reminds many people of deep red, but, in fact, color variations are rich in the same way as tourmaline, and it is said that there are almost all colors except blue.

From the dark green garnet mentioned this time to faintly beautiful mint green, there are plural kinds. By the way, the green garnet is a stone of the guidance and the wisdom and this garnet crimson is the stone of love and the passion. I will introduce a care method as well as power to control.

What kind of effect does green garnet have in detail?

Love of the royal road: to spin a bond of the love that you come across newly firmly for a long time.

Thanks to it, to the pace of the partner, you read the change of the feeling of the partner casually and it supports you so that scolding encouragement, healing are given precisely. It conveys your underlying deep love “to be your friend anytime” in the heart of the partner.

The partner who received your earnest thought as a reliable thing puts relief and trust; of you when the partner “wants existence to be by the side as an only understanding person” strongly.

There is not the gaudiness such as dramatic progress, but perseverance and generosity and rich deep love will bring not intense and short love like fireworks but prolonged calm love.

Health of the body: to keep mental and physical balance and raise vitality.

The various color of garnet controls defense to leave vitality and every wicked. In addition, the youthful spiritual strength that green garnet brings has the action that pours positive energy into health and beauty.

It is important to keep both mental and physical balance with the true health. Not only the garnet fixes the condition of the body, but also becomes the powerful secret letter for mental stability.

When physical strength too falls and you are depressed mentally, the garnet is full of energy and you tend to be defeated by a stone and consume willpower physical strength. Please neutralize power with crystal in such a case.

Stability of the heart: to be able to do a feeling calmly.

A characteristic of the garnet is to give positive power. It is the very thing desired for a person “who is apt to worry unnecessarily,” “who feels only uneasiness against in thinking the future” and who “is worried about an impression and an evaluation from another person, and cannot express oneself well”.

Because the person relieves uneasiness, positive mind is promoted and spiritual strength increases, courage to move forward is encouraged.

Philosophy of life: to raise an experience level of the life.

The green garnet is called “the stone of the leader”. It gives a person to overlook wisdom, experience, a spirituality thoroughly and it is the most effective and initiate you constructively while adjusting a transmission method with the tolerance of the partner, condition of the progress.

It is formal when I explain it. In brief, it is able to give you knowledge needed by the situation and a method most suitable for you when you expect it. It is given in a true experience or it may be one paragraph of the book or a part of memo which you come across by chance.

With a power of the green garnet, you may notice such a signature that can be overlooked. You grant power to perform step-up through difficulty for the person on the very turning point now who wants to challenge a new thing.

Others: to draw deep wisdom and talent.

It is one of the characteristics to control positive trust and strong patience, but this stone adds calmness, presence of mind, and generosity more. You ascertain it in the situation of the owner, and there is the power to lead to the most suitable behavior each time.

You will come to be able to polish power to ascertain nature and the thoughtfulness as “a leading person”, sharp observing eye and opposite poles as you wear it and match a wavelength. Furthermore, there is the function to fully draw insight, wisdom and talent.

The green garnet helps you raise vitality, draw calmness, forethoughtfulness and generosity, and spin a long bond. There is the effect in the simple substance, but it can show the power that each has more by putting a congenial stone together to the maximum.

Let me introduce some.

When “you want to ascertain a partner, = opal” raises your sensitivity most when you are stable mentally and concentration increases.
When “you want to be positive = peridot” brings development, improvement and power to realize a dream.
When “you want to raise vitality = hematite” shows the best healing effect for health and a malarial air payment because it is superior in power of reinforcement and the blood circulation promotion of the heart.
For “evasion of danger = pyrite” can keep your possibility alive to the maximum by putting it with a crystal of the victory to lead an owner to the success.

Being superior in intuitive power helps you take part in crisis evasion. When you feel that power of garnet in itself is strong, aren’t strong in a body or fragile mentally, at first use it in conjunction with crystal. There is the power mediating between with an owner and the stone by adjusting the power that is too strong in crystal.

To continue an effect for a long time. Care.

While you use it, power Stone breathes in various malarial air, and effect weakens. Care for such a stone which has been tired properly and can revive again by letting it take a rest.

The purification method suitable for green garnet is sage, smudging (=smoke) with the incense by burning a plant to each use and effect and am a thing and space, which is the most primitive ceremony to be called with the basics to purify the person, a moonlight bath, a crystal cluster (putting it on crystal, and putting it overnight), a tuning fork (purifying it with a tone), salt with the smoke.

It reveals whether “you are tired” by a sense when you wear a stone. A power stone or the accessories should be purified when you find it in intuition or regularly.

“It was the green garnet which you might rarely hear,” might understand that it was the miracle stone which I hid presence of mind and certainty in when I did it this way when you compared it that well-known.

Watch it for a hand when you saw it by all means in shops when you become interested. At that time, the stone is a messenger of the good luck for you if you flash when “it is this”. Pray in spite of being a shadow so that you and power Stone can achieve the best encounter.

What kind of effect does green garnet have in detail?

Love of the royal road: to spin a bond of the love that you come across newly firmly for a long time.
Health of the body: to keep mental and physical balance and raise vitality.
Stability of the heart: to be able to do a feeling calmly.
Philosophy of life: to raise an experience level of the life.
Others: to draw deep wisdom and talent.
Recommended combination edition by synergy more happily.
To continue an effect for a long time. Care.

7 tips to love each other – Advanced

7 effective love spells from all over the world!

Let the life improve using an effect of green garnet!

7 Love Spells to Fulfill Your Love

...
Home
Charm
What kind of effect does green garnet have in detail?