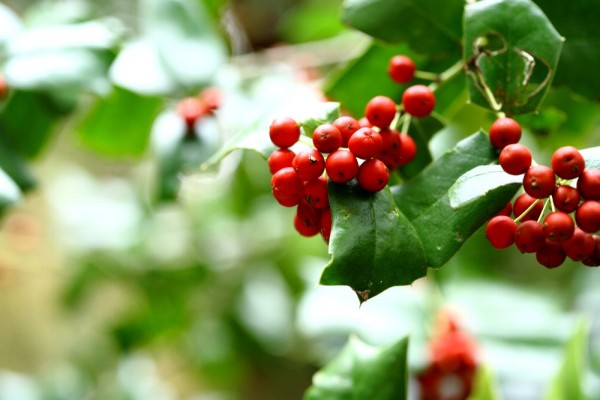 It is a green burr with the splinters that you hear with “a holly”, and remember to model the point of the leaf. A thing with the fruits which is red on a notched leaf is a motif to see well in a Christmas season.

In both Japan and the West, as for the holly, it is believed, “It pays illness and do not allow a bad thing to come near”. It is the holly which has such a sharp impression, but, in the notched leaf, touches an ill-matched pretty white flower. You can enjoy the waff very indulgently.

It is the various hollies turning up of the talisman against evil, but shows the interesting change during the life. It is reflected for the flower language of the holly. You are told that the holly has “foresight”, and there is the power that surely leads the future.

In 7 reasons why the flower language of the holly supports your future, there is such a thing. I will introduce me.

“A welcome.” Because the flower of the holly disagreed with the sharpness of the leaf and beckoned you to come with a good fragrance, you are accompanied by these words.

Let’s support the future by foresight

Is the holly which is characteristic on a leaf, but the leaf when is young whether knew that a leaf is thorny while a leaf is young is sharp; when is thorny, and touch it carelessly, skin is damaged, and have a pain.

In fact, the name called the holly comes from the word “Stinging”. Stinging means that it aches. But the leaf which iss sharp when a tree repeats age becomes slightly round. Finally a splinter completely disappears and becomes the round leaf.

A change not to be so became the flower language called the foresight first even if you think that it is dangerous.

Another name for holly is called “the eyes stab of the ogre”. It comes from the legend that eyes are thrust on the leaf of the holly, and an ogre evaded. It seems to become uncommon, but used the holly for Kansai as exorcism now.

In the evening of the day of the traditional end of winter, you sandwich the head of the sardine between the leaves of the holly and put it in front of entrance. It seems to be believed that an ogre disliked smells of the heads of the sardines.

A holly having a pain in protects a house if I touch it with a hateful smell. I will have you protect a holly in a side not to allow a bad thing to come near.

Even if the holly knows a leaf and the fruit, flower is not known so much. From the autumn end in the winter, it makes a small white flower bloom. As a petal warped, as for the flower, a point, the contrast with the leaf with the splinter is beautiful, too.

Because the holly is American olive department, you have the sweet impressive fragrance such as the fragrant olive. The fragrance can enjoy the attractiveness of the flower and feels gentle in the season when cold becomes severe.

It is the “cautiousness” “integrity” flower which reminds you of the well-defined wonderful woman who really gives off a gentle fragrance in spite of being durability. Like a holly, you want to aim at the strong, gentle woman.

It was the Japanese name which was added by saying that this resembled a Japanese holly. Two leaves of aces each other, and the Japanese holly runs out, but the holly appears so that a leaf is wrong different in right and left. What is believed as a talisman against evil in both West and Japan is common.

Let’s believe power to be given from a holy tree

The holly becomes the birth flower of December 24. This green leaf and red fruit are displayed for the lease to decorate it at an ornament and a door of Christmas.

The plant to produce a bright red fruit in the depth of winters is rare, and it is said that it was holy from old days. That means that is believed like that more for some time than Christ is born.

The name called the Chinese holly is not for show, too. Borrow holy power when you put it in closeness, and does power not feel like being heated?

Let’s get power to hide in a new thing

I have the name called “a splinter of Christ”. The white flower means the birth of Christ, and the bark and the fruit express the suffering, which was carried away because it bore the crime of people in the position, and the blood of Christ became a victim.

It is that it was repeated many times in history that a new thing is born by being bleeding. The holly gives the power to begin that is new that are reborn.

It has been believed that the secret magical power of the holly won bad power for some time for several thousand years. I think that I touch it to the thing which is important for that hateful splinter having a pain in slightly when you think so.

That, from the place that there is, I want you to perform it in the slightly different place or want to change from oneself present now.
When you find a conjugation and imagine the future, the holly surely keeps away a bad thing and you lead it to the good direction and will protect it. How about displaying a holly in the doorway on traditional end of winter and Christmas?

For you with cat eyes, the drooping eye makeup

7ways How to Grow love with a Scorpio Personality

...
Home
Good luck surgery
7 reasons why language of the holly support your future