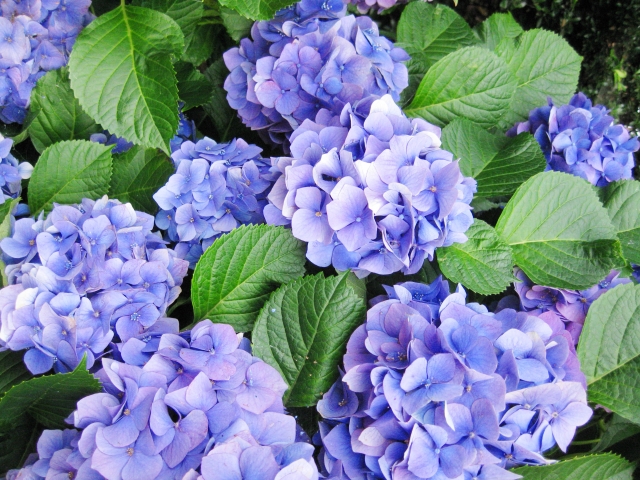 When the rainy season arrives, one flower shines like a jewel. That is the hydrangea. Nowadays, more and more people are giving it as a present because of its beauty. However, have you ever heard a story like this? “The hydrangea changes its color, so it has no good meanings”.

Nevertheless, there are good meanings for this flower and it all depends on the color. Learn a new perspective from this article. You will never look at hydrangeas in the same way!

I will introduce its meanings and some notes for giving it as a gift.

Hydrangea Meanings. Choose the Right Color for a Gift

As you know, this flower’s color changes as time passes. It first starts as green but it changes gradually. This phenomenon has to do with the ph. Level of the soil. If the soil is acid, the flower will be blue. If it is alkaline, the flowers will be red.

Also, towards the end of the blooming, hydrangeas tend to become red because of its own organic acid. This does not have anything to do with the soil. By the way, the white hydrangea does not possess anthocyanin. So it remains white. As you can see, the qualities of the soil and the properties of the plant itself determine the color.

2. Hydrangeas have some many meanings

From the reasons described above, hydrangeas have “fickleness”, “cheating”, “betrayal”, and “heartlessness” as their meanings. Giving a hydrangea would give an impression like “you are indeed beautiful, but cold”. Thinking on these lines, you would not want to give it to someone, right?

However, it also has positive meanings such as “perseverance”, “patient love”, “and cheerfulness”. I will explain more in detail later, for each meaning differs according to the species and color of the plant. Maybe, the hydrangea has so many different meanings because each color gives a different impression on people.

3. Patient love for blue and tolerance for white

Hydrangea is originally from Japan. It is known in other countries as one of the flowers that represent Japan in the same way as cherry trees and camellia are recognized. To begin with, the name of hydrangea comes from Azusai, which means “gathering of blue things”.

One of the most fundamental meanings is “patient love” of the blue hydrangea. Look how these words perfectly describe the condition in which the flower blooms – it endures heavy rain in a very modest manner.

Also, the pure and powerful white hydrangea means “tolerance” in the language of flowers. It also means “indecisiveness”, but let’s focus on its positive side.

4. Pink hydrangea for a cheerful woman

Pink hydrangeas are commonly found in France. The color pink gives a very vigorous impression. Therefore, it symbolizes “a cheerful woman” full of energy.
Recently, the horticultural species “fairy eye” and “dance party” are sent in pots as a gift for mother’s day. Both are pink and perfect for such an occasion.

5. The meaning for lacecap hydrangea

The original species of hydrangea is the Japanese “lacecap hydrangea”. It has big ornamental petals around a cluster of small circular buds (in actuality, these are the real flowers). The species that have petals blooming in a circle are different forms of the lacecap hydrangea.

By the way, the hydrangeas that have been changed through breeding in the West and taken back to Japan are called “western hydrangea”. The meaning for the lacecap hydrangea is “humbleness”. It may not be as gorgeous as the western hydrangea, but it is the first of all hydrangeas. Don’t you think that it deserves to have this meaning?

6. The positive image of hydrangea

Besides these meanings, the hydrangea has the image of “union”, “friendship”, “family harmony”, “closeness”, and “peace”. If you take these impressions, you can use hydrangeas for wedding ceremonies.

7. Use hydrangea’s meanings for gifts

As you can see, this flower has so many positive meanings. Why don’t you use these messages for a gift?

As mentioned before, a pink hydrangea is perfect to give to a woman. A white or lacecap hydrangea would be good for father’s day. If you think that a big pot is too showy, you can give a smaller hydrangea like a tea-of-heaven.

The tea-of-heaven is treated as a plant of the mountains in Japan. So it would be rather plain like bonsai. You can also give it to a couple who is marrying in the rainy season. A blue hydrangea would have the best meaning!

Don’t forget to put a message on a card and tell your feelings.

Hydrangea is really popular among women. Many of them use it as dried flowers to decorate their houses. The dried hydrangea is nice for a gift because it lasts long.

No other flower has so many different meanings. It is such a beautiful flower. Why don’t you give it to someone special?

Hydrangeas. Choose the Right Color for a Gift

1. Learn why hydrangea’s color change.
2. Hydrangeas have some many meanings.
3. Patient love for blue and tolerance for white.
4. Pink hydrangea for a cheerful woman.
5. The meaning for lacecap hydrangea.
6. The positive image of hydrangea.
7. Use hydrangea’s meanings for gifts.

7 birthday messages to make her cry with joy

7 ways to tell your love with tulip meaning

7 messages with the meaning of Dandelion
9 magics to make your wish come true
7 lucks we can tell by dream of fire
Must-read if you had dream of snakes! 7 ways for happiness
8 attentions on a dream of heartbreak
9 methods to be lucky with wallet color by feng shui
7 ways to tell your love with tulip meaning
Blood type O personality and behavior!
7 scary signs you have to be careful dream of snakes
7 to be beware having dream of pregnancy