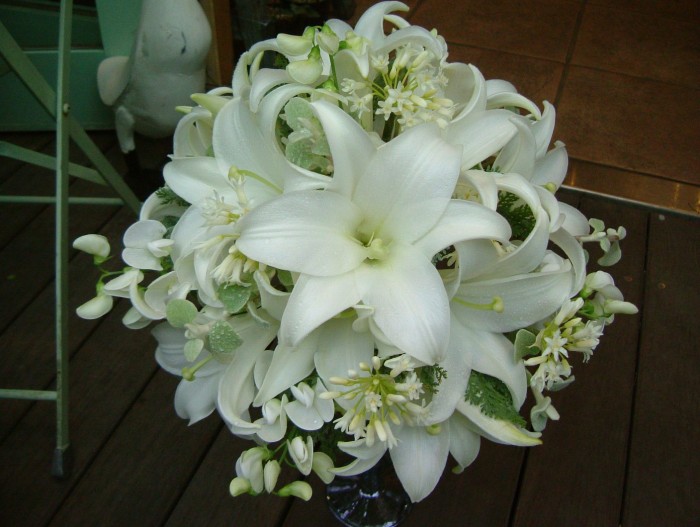 Due to its overwhelming beauty, lilies are often used on ceremonial occasions. Elegant white lilies are loved as a wedding bouquet because they make a graceful and gorgeous atmosphere.

In Japan, 15 kinds of lilies grow naturally and they have been so popular for a long time that they were written in the oldest chronicles of Japan. In Europe, they are traditional status flowers used as motifs of crests, medals, and currency.

The famous flower meanings of lilies are “dignity,” “pure,” “innocent.” These are suitable for elegant beauty of the flowers. However, do you know that some of the meanings are not appropriate for some situations?

Focusing on the meanings of lilies, I summarized some points to be cared when you use them as a wedding bouquet. For happy wedding, lucky motifs are favored.

It is better to avoid meanings giving negative impression. To do so, let’s know the flower meanings of lilies.

Caution points of lilies for wedding bouquet by meaning

Be careful with a meaning of “vanity”

Red and pink lilies have meanings of vanity or suggestive. These lilies have vivid colors from pale pink to deep red, so some people would like to use as a wedding bouquet.

Red lilies have kinds of Landini, Monte Zuma, and pink lilies have Viviana, Sorbonne, Sheila, Asuka. Each of them is attractive. There are “warmth” and “wealth and prosperity,” positive meanings for wedding ceremony in Europe. It depends on your point of view.

Be careful with a meaning of “false”

On the other hand, yellow encourage feelings and yellow lilies have many kinds of brilliant colors like Serrada, Yelloween, and Courier of pale cream yellow.

Be careful with a meaning of “anxiety”

Yellow lilies have a meaning of “anxiety” in France. People associate yellow color to negative image in France too. White lilies are a symbol of Virgin Mary and related to an innocent girl. I’m sad about this because they have completely opposite meanings just by differences of colors.

It is not bad to have them focusing on the good meanings such as “cheerful” and “artless beauty,” but it is better to avoid them if you care these bad meanings.

Be careful with a meaning of “carelessness”

Orange lilies have a meaning of “carelessness.” Orange is a close color to yellow, so people take it as negative impression in Europe.

However, they also have positive meanings of “splendor” and “pleasure” about them. Orange is a powerful and cheerful color like the sun and a lot of people like it. There are Royal trinity of attractive bright orange, Avocado of light orange, Gluhwein of reddish pale orange.

Be careful with a meaning of “hatred”

In Europe, orange lilies have a meaning of “hatred” too. From yellow to orange, some lilies have meanings of envy and hatred. Especially in wedding ceremony, it is necessary to care. In addition to a wedding bouquet, people who are getting married might misunderstand given orange lilies.

If you give orange lilies as a gift, you’d better to write a message including the positive flower meanings of “splendor” and “pleasure.”

Know a meaning of black lilies

Although they are not used in wedding, they are famous for their scary meanings. Black lilies have meanings of “love” and “curse.” They are the lily family’s perennial plants that grow around a lowland area of Hokkaido(the northern prefecture of Japan) and bloom flowers colored deep purple almost black.

The origin of this meaning is a episode about Japanese warrior, Narimasa Sasa and his wife, Sayuri. When his beautiful wife was pregnant, a rumor that the baby’s father is not Narimasa spread out. He was enraged about this rumor and killed her. She left these words, “If black lilies grow, the Sasa family will die out.”

Let white lilies to be a bouquet

My best recommendation for a wedding bouquet is white lilies. White lilies have suitable meanings for wedding such as “purity,” “dignity,” “innocence,” “artlessness,” and “sweet.” I specially recommend Casa Blanca because they have gorgeous large flowers. Their meanings are “dignity,” “purity,” and “high class.”

Though most white lilies have spots in their petals, they are popular for wedding because they can show purity. They are good on white wedding dresses too.

How did you like it? Lilies are appropriate flowers for wedding ceremony, but there are some points that you need to care. With these flower meanings in mind, how about to pick your favorite one and prepare a wedding bouquet if you get married?

When white lilies are used for wedding, other colors are not used together in most of cases. If you want to add colors like yellow, it is a good idea that white lilies are decorated with other kinds of flowers.

Lilies are famous as an example of a beautiful woman and a symbol of Virgin Mary in Christianity. Gabriel gave lilies to Virgin Mary at her annunciation. Let’s have a happy wedding ceremony with holy lilies.

Caution points of lilies for wedding bouquet by meaning

Let’s mark men of the heart with an email not to fail!

7 techniques to make a healing house for love luck

7 cute girlfriend gestures to get married

7 charms to conquor with your love battle