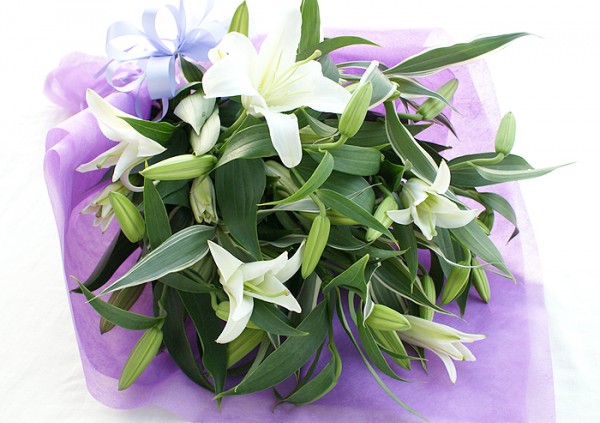 A lily is one of the most popular flowers in the world. There are more than hundreds of varieties of lilies that can be found in the northern hemisphere, and they come in different shapes and colours.

A lily looks elegant compared to other flowers.

In Japan, there is a proverb like “she looks a Chinese peony when standing, a peony when shitting, and a lily when walking”. So a lily is used as a metaphor for a lovely woman. Also, language of lilies are perfect to describe a elegant woman.

This article will introduce 7 lily flower meanings with some tips on how to be elegant.

Because of the looking and fragrance of lilies, the flowers are associated with pure. Therefore, it has been a symbol of pure.

Especially Madonna lily, which is milky-white colour, is often associated with Mary. You may think that a woman who smells like faintly a lily is clean and decent

When you want to have a pure aura like white lilies, try to use soap or body cream.

A lily has language of flower “virtue”. Virtue means a good habit based on moral sense. So you may imagine a woman with her own morality and a good habit.

A woman is so attractive when she has own her mind, so she matches with images of a lily.

Not only appearance but inside beauty can lead to being elegant.

As coat of arms depicting lily flowers helped raise spirit in French history. Joan of Arc is often compared to a lily flower.

That’s why a lily is associated with a pure and noble woman. A lily flower motif has been popular regardless of gender.

It is often used for fashion accessories, so why don’t you try some?

A lily flower smells like as if you were at church. Compared to other flowers, it smells not only sweet but fresh, so you may feel like you have to straighten up.

The scent of lilies helps produce estrogen, which is considered to be the female hormone. When you are too busy to take care of yourself, it can be good to use lily essential oil and enjoy sweet fragrance.

Beautiful because you are strong

A red star lily, which is native to Japan and the Korean peninsula, has language of flowers, such as “proud” and “beautiful because you are strong”. The flower is found in mountain areas or grassland, and blooms facing upwards. It looks like a woman who survives in this tough society. When she expresses her strength, she looks very beautiful.

So, the flower has very perfect language of flowers, which match with women today.

A lily has “sage”. The flower has been a symbol of spirituality, and then an image of intelligent women and mothers.

In Greek mythology, goddess Hera’s milk which offered eternal life became a white lily. A long time ago, people might have thought that maternity of a wise woman was associated with milky white lilies, which is the same colour as milk.

I can’t cheat you

There have been many lilies in Japan, so the flowers made a profit by being exported in the Meiji period. A Japanese lily means “I can’t cheat you”.

This meaning can be a image of a Japanese woman, whom it is hard to trick. If you wear summer kimono or kimono with lily design, you can be elegant.

A lily has language of flowers which express beauty of a lily and has an image of a pure and intelligent woman. As mentioned, you can use them in your everyday life. Also, the easiest way is to buy fresh flowers and put them in your room.

– Pure
– Virtue
– Noble, proud
– Sweetness
– Beautiful because you are strong
– Sage
– I can’t cheat you

7 alchemies to grant your wish of getting back together

List of things to make your dreams come true

Images of love: 7 special images for the luck in love

7 tips to ask girls out, from men with cute girlfriend

7 Common Wrong Points How to Get Taller

...
Home
How to fulfill a wish
Lily flower meanings : how to be elegant