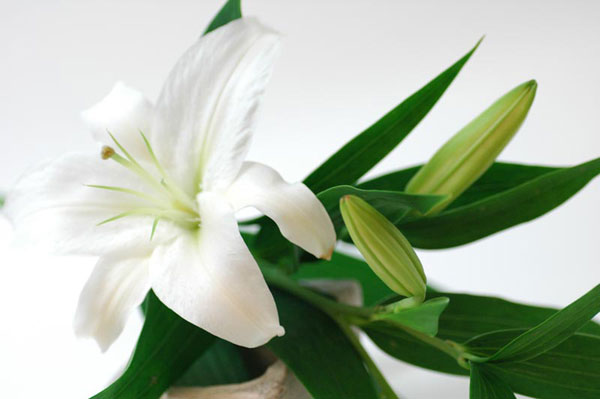 Each flowers has its own meaning but for a lily, it depends on the color or type. So when you use lily on the aisle of the wedding, you have to choose the adequate one.

But it has so many kinds and each one has their own taste. It might have meaning that it’s a decision to go forward to the new chapter of life going through the middle of a white lily.

It’s often used in a wedding because of it’s sophisticated look.

There’s some types called golden-rayed lily or Lilium longiflorum etc. It’s exactly suitable for the wedding’s aisle! It becomes more beautiful when the bride holds it.

It’s similar to the purity, but actual meaning is being totally innocent and pure, nothing is blended.

Japanese white kimono for the wedding came from such meanings and it means the bride can be tingled by the new family. There’s a kind of wood called ¨natural wood¨which came from one tree and it’s never blended with other materials or kinds so that you can use it ¨naturally¨.

Casablanca is the most suitable flower for a wedding because of its pure white color. It means the bride will marry being pure innocent.

Normally you don’t really see or hear this word but it also means ¨settled perfectly¨or ¨beautifully decorated¨ saying that things are set neatly and solemnly. In Japanese, it has two ways to read and each meaning differ.

Tiger lily is also suitable for the wedding thanks to its sophisticated and elegent appearance.

It means also the brides’s future will be sweet and bright with all the positive meanings.

White lily remindes people to think about the happy bride who walks on the isle during the wedding. It’s a nice word to give wishing her eternal happiness and happy life.

This meaning came from a vivid orange tiger lily because of its glamorous beauty. Normally people think of white lily first after hearing the word ¨lily¨. But a tiger lily has such a huge impact and it look so fabulous. It changes an atmosphere into a bright one as if the bride who changed to the party dress. Not only the color, but also the shape is beautiful. Glamorous lily is nice too.

This meaning came from a casablanca because of its big and magnificent look. It’s an outstanding lily among the other kinds. It has a deep meaning and its beauty stands out. It’s very suitable for the wedding as if it represents their huge and magnificent future life!

It came from a japanese lily. It’s very elegant and sophisticated as if you get purified by just looking at it. Not only the appearance but also the scent is good.

It’s very sensitive for the changes so it’s very precious. It blooms faster than the other lily. It exactly looks like a bride.

So, how was that?
So far what we understood is these 7 lily and meanings are all suitable for the celebration. It has a gap from its look and it’s such a fun to choose.
Also it’s nice to choose the one which suits the bride’s character. Sweet lady, beautiful lady, social and cheerful lady or calm and quiet lady….you can imagine her happy face after seeing the chosen lily.
But some color or type of lily has a bad meaning so you have to be careful to choose because it’s not suitable for the celebration. Generally lily has only a positive meaning, but pink color one means also ¨vain¨ or ¨insinuation¨. Sometimes it’s dangerous to choose lily just by its beautiful look.
So research well in advance and choose the best one for the aisle of the wedding.

9 to be careful for aromatherapy candles

...
Home
Good luck surgery
7 ways to give lily as a gift with meaning