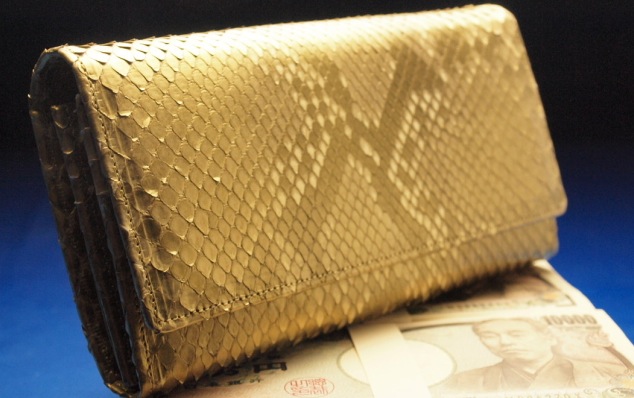 Although it is said money is not necessary if there is even love, but one of the means to an end is actually necessary. Although you do not need it in excess (no, you actually want it), you may say that more is better or that you are delighted to get it as much as possible.

Then why not improve your luck in money with the help of the power of feng shui? Today I will introduce the color useful for your wallet and tell just a knack.

“Yellow, or Gold” is basic

It is the color that you may come at first to mind if you hear feng shui, improving luck in money, and a wallet, isn’t it? The both colors have the vital energy of metal(gold) and the color itself holds strong energy potentially. And it has the power to make a fortune stable, while on the other hand it includes the power becoming better for an “operation of money” rather than that of the luck in money. In other words an income will be active but an outgo will be as well.

Gamble enthusiasts should be careful for the energy of color. Because the power is too strong in the primary color, you should choose the thing of pastel color or somber one, or the thing with a primary color used partially, or should combine with the color having the vital energy of soil responsible for stability such as ocher.

The both are the color having the strong power to protect a certain fortune. It can be said that it is suitable for the people who want to accumulate steadily because they have been successful to some extent. The power maintaining the present fortune is stronger rather than that of creating new one, therefore the people who want to take a leap forward may not be completely satisfied with it.

It is recommended to the people who are satisfied with the current situation so that they would make ​​a fortune consistently in the future.

The color does not have the effect of improving luck in money but potentially holds the power of the reproduction to call back the money that has already left. It is said that it is a good color for a faithful person working on a job steadily and seriously.

“Blue” is effectivet for saving

It is the color that calms down the feeling and plays a part of saving. It will show an effect for the people who “can be firmly earned on their own and have a reasonable income, but do useless shopping for no special reason” because of the power of suppressing wasteful spending and impulse purchasing.

Also in this case, the dark color such a primary color or navy blue has the strong vital energy of water and sometimes may drain money and the fortune coming in with much trouble. The pale colors such as pastel blue would be better if you want to incorporate your wallet. Not only the vital energy of stream is suppressed but the vital energy of “increase” of the color is utilized.

“Pink” brings up a fortune

It has the effect of bringing up a fortune, and potentially holds the power that facilitates human relations and bring up the money necessary to fulfill a dream and a goal.
Because it has rather the power that will attract other person’s help and assistance, in the eye of the woman who is independent she might hesitate a little. However will you think you are encouraged by having the fortune with something extra on your side?

“Purple” is effective for success or promotion

It potentially holds the power to raise a status or a honor rather than luck in money. It is recommended for the people who think that money comes later and want to improve their status for the first goal. It will be a reassuring charm for the career advancement and the promotion.

It potentially holds the power to accumulate a fortune and a purification action. It is recommended for the people who think that they want to change the luck in money up to now, that they want to start over again, and that they can obtain a new luck in money. It is a knack that you do not use it immediately after you purchase it. It can develop the power by letting time pass a little.

On the other hand, because it is easy to absorb the dirt of the appearance and the dirt of the vital energy in the property of the color, it will require to always keep clean and replace it before it becomes too old.

Because the vital energy of fire is too strong, it is red or orange which is not said well such that it burns money; or that it gets you go on a impulse purchasing, and so on. The color itself surely has such a power as is too strong. There may be the person who cannot control their impatience as saying “I like this color by all means.”

“3 kinds of items put in a wallet”

The first one. The person who has neither “a small article of gold contained in the paper fortune” nor “a bookmark of gold” keeps an item made with “folding up compactly origami paper of gold.” It is nice to fold up a crane or a little something and to put it in. As I have introduced earlier, the gold has a very strong power. Therefore even such a small article sufficiently produces the effect improving luck in money.

The second one. Money attracts money. How about “a seed of money”? You prepare a new bill of 10,000 yen. You must never use it. It is much better that the end of the number is 9. You fold in four lengthwise and in a half widthwise. It makes a square.

you wrap it in Japanese writing paper or put it in a small bag such as a decorative paper envelope for money given to children called a pochi bukuro, and then keep it in a wallet.

The third one. A “rutile quartz” is really famous for a natural stone of improving luck in money. Since it potentially hold the power to control not only the luck in money but the luck in art and the luck in love, it will be good to attach a small thing as a strap. However the stone controls fire. Be careful in combination with color.

Anyway, it is best to use the thing that you like. On that bases, I am happy if you can refer to the article. You should think how you customize your favorite thing more effectively rather than you are swayed by a color or an effect. I think there are other various methods.

Please try to make “your own” wallet improving a luck in money in combination with various methods. Well, dispose of a worn wallet with the feeling of thanks. Because the heart to yearn for things is also one of the items to attract a good luck.

・ “Yellow, or Gold” is basic
・ “Black, or Brown” protects money
・ “Green” calls back money
・ “Blue” is effectivet for saving
・ “Pink” brings up a fortune
・ “Purple” is effective for success or promotion
・ “White” resets luck in money
・ “Extra” color which is not good in the base of feng shui
・ “3 kinds of items put in a wallet”

9 things to make a saving by pink purse

9 methods to be lucky with wallet color by feng shui

7 methods to save twice as much money with money spell

7 ways to be fine by feng shui door color