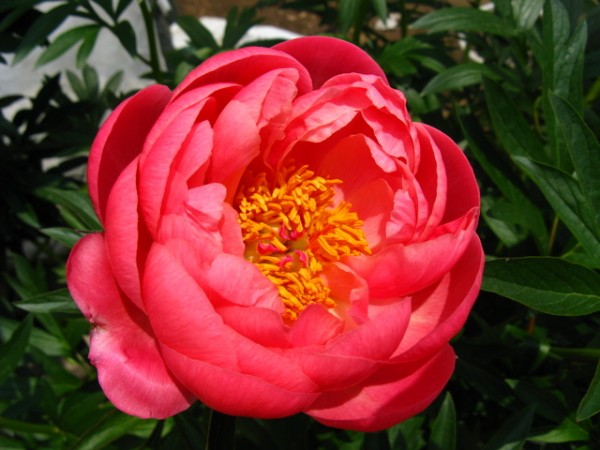 Speaking of peony, many people may come to mind these words. It is the words that liken the beautiful woman who is tasteful like a peony and is brilliant like a moutan and is neat and clean like a lily to a flower.

It is wonderful. I also want to be said so once, but it seems to be difficult for me however I may try because the peony is the image of the tall and slender beauty reflecting such a figure that extends straight toward the sky.

On the other hand, there are the people who have the peonies in the garden and can see the flowers every day. Since the peony produces a big flower, it is difficult to tend it and it may be difficult to make a beautiful flower bloom.

However you might be able to make an approach to the flower of the peony with growing it successfully. Today you will learn from the flower language of the peony to how to grow it and approach the beautiful woman such as the peony if only a little.

There is an anecdote in connection with the flower language of “shyness” in the Greek mythology.

The god of pharmaceutical Paieon eased labor pain of the goddess of childbirth Leto who conceives a baby of Zeus with using the roots of peony. As a result, Paieon won the favor of Zeus and gained fame, but he was terminated life because of the jealousy of medicine of god Asclepius is my mentor.

It is said that the goddess Leto who regretted his death made Paieon reborn as a peony.

The peony is the plant that masterfully eliminated “shyness” and “uneasy heart” of the woman who prepares for the birth of her baby.

It was the same in the Orient including China. The peony has been carefully brought up as a valuable medicinal plant. You may be able to associate it with the name of “shakuyaku, or good taste medicine.”

Because the “shakuyaku” has a lot of functions such as anti-inflammation, analgesia, antibacterial effect, hemostasis, it has been treated as a particularly important plant in other oriental medicines. The flower language of “cleanliness” expresses the efficacy of such a crude drug.

Both have a large flower and are gorgeous, shiny, and overwhelmingly beautiful for the people who see it. By the way, in many cases in the shops the peonies are placed as cut flowers and the moutans are done as potted plants.

It is why the positions of the flowers are different because the flower of the moutans bloom on the tree, but the peonies bloom on the growing stems. The flower language of “dignity” arose from the appearance of the peony blooming magnificently.

By the way, the peony must not leave it as it is after having finished blooming. It is why nourishment would be taken in order to make the seeds. Pick it immediately when the flower is over.

The peony looks gorgeous but closes petals in the evening as a matter of fact. The situation is described as if a woman is bashful because it is used as the flower that likened to a beauty. It is a very anthropomorphic example.

In the same way, there seems to be an idiomatic phrase “blush like a peony (blush as peony)” meaning “be red in the face” also in English.

They may also see the event that the flower of peony closes in the evening as the situation of being bashful.

The peony belongs to the paeoniaceae and is very similar to a moutan. However the moutan is the flower which asserts itself more. In addition, there is the big difference that the moutan is a tree but the peony is grass.

Since the peonies are grass, they diapause as if the leaves and flowers die down in the winter. However they do not completely die down. Give the manure when flowers were over in September and before flowers bloom in February. By doing so, they will make large flowers bloom again in spring.

The peony has been loved as a beautiful flower in not only Japan but European countries. Therefore there seems to be the peonies with the oriental and bewitching atmosphere in the peonies improved in Europe.

The peony radiates an Oriental mysterious atmosphere. Therefore European people might get a glimpse of the “quietness” that the Orient women had in the flowers of the peonies which came across from the Orient.

Originally the peonies were imported as medical plants from China during the Nara and the Heian periods.

The “peony” started to called “shakuyaku” with Chinese‐derived pronunciation on the basis of the name in China which is the country of origin. Although it was used as a medicinal plant at first, it started to be improved for the ornamental use in the late Muromachi period because of excessive beauty. The improved peonies gained popularity as “flowers for tea” in the Edo period.

The peony extends small above even if it is improved. Of course it is why a stem stands straight without branching it off because a peony is grass, but the figure looks to bloom modestly even if it is made a fuss over.

With regard to the peony, it is not a very common flower though you may know the proverb. It is slightly subdued and expensive, and it does not the flower that rarely appears in a bouquet. However the beauty of the peony which is likened to beautiful women in both the West and the Orient seems to be the same internationally.

Although you may have a lot of chances to see the peonies as cut flowers, bring them up calmly if you have an opportunity.
It is the peony which you often look at with cut flowers, but please bring him up slowly if there is an opportunity. Then, I should be able to see it when I am shy of look like an unattainable object, peony. If so, you could see the peony looking like a flower on a lofty height shows the appearance of shyness.

9 ways to remove stresses with affirmation

5ways How to Welcome Guests by Clematis’s Floral Language

7 selections matching for the bougainvillea flower

...
Home
How to raise a fortune
7 key points about the peony flower and how to grow it