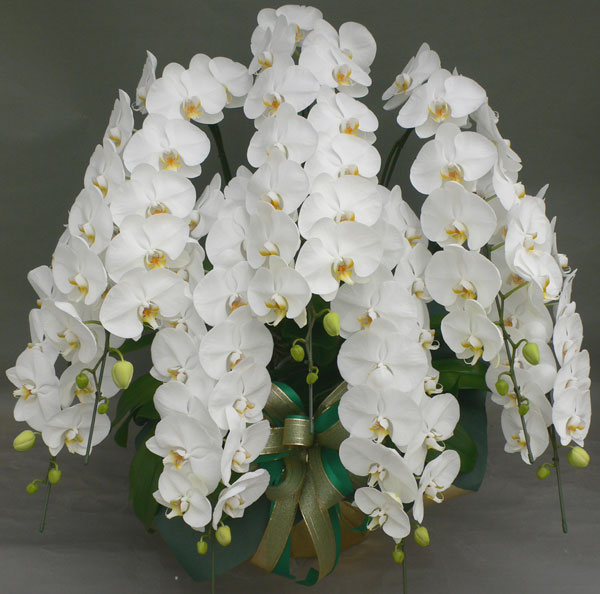 Phalaenopsis is orchidaceae and distributed in warm regions like Southeast Asia draws many people attention at flower shops.

Phalaenopsis’s distinctive feature which petals line up vertically looks adult woman wearing white kimono and it is full of grace. It can make gorgeous atmosphere, so phalaenopsis is a really popular flower as a gift.

7reasons language of Phalaenopsis is popular as a gift

1. Good luck flies to you

Phalaenopsis’s floriography varies from colors, but it has common language of flower which is “good luck flies to you”.

Maybe petals of phalaenopsis looks like wings, so it is associated with good luck flying to you like a butterfly. So phalaenopsis is especially favored to be given when someone starts new things like inauguration ceremony or marriage.

By the way, phalaenopsis means “It looks like a moth” but Japanese people do not have good image on a moth, so a butterfly is better.

2. Orchid is symbol of prosperity

An orchid has been associated with prosperity since period of ancient Greece. So it is said that some young women ate orchids at that time.

It has been taken over for a long time and an orchid became a symbol of prosperity. So the symbol might be the one of the reasons why phalaenopsis is popular as a gift. Why don’t you give someone important phalaenopsis?

Since orchids do not have strong smell and are popular among women, they are great gift for people having a baby or expecting.

Phalaenopsis is relatively tough plants, so once you prepare the environment for it you can enjoy it for a long time without much effort.

Once phalaenopsis blooms, it keeps for a couple of months. After the flower falls, it will bloom again with little care. So it leads to good image like steady love or steady business on a phalaenopsis.

Phalaenopsis is easy to take care in a house so that is the one of the reasons of its popularity.

When orchids were come to be known in the world, they were really rare flowers because they were only distributed in some warm regions. So the image of graceful and gorgeous on an orchid was created with its appearance and smell.

Since an orchid is so graceful and noble, the flower would be the great gift for celebration on new high-class restraint open or something. And it would also be good as a gift for graceful women like mentor of tea or flower arrangement to express your respect. .

5. Phalaenopsis is a symbol of love and beauty

Phalaenopsis Aphrodite which is the scientific name comes from Aphrodite who is goddess of love and beauty.

In the Victoria age, orchids were compared to extremely beautiful women.

And it blooms symmetric flower, so it is said that an orchid expresses perfect beauty. So people often compare an orchid as a perfect woman rather than a subtle woman like a wild flower.

6. White phalaenopsis is symbol of purity

White phalaenopsis is symbol of purity. So it is often associated with wedding dress and people give the flower as a gift for wedding celebration.

As I mentioned in the articles, phalaenopsis’s flower language is “good luck flies to you and bringing stability” so the flower is best for brand new marriage couples.

If you give white phalaenopsises with a message card wishing for building a wonderful family to your friends having a wedding, it would make them happy for sure.

7. Pink phalaenopsis’s language of flower is “I love you”

Pretty pink phalaenopsis’s language of flower is “I love you” so you can use it in romantic situations.

By the way, in ancient Europe, people struggled to find an orchid to express how deeply they love someone important. It has such a romantic history.

Why don’t you give a pink phalaenopsis to someone you love and express your love?

Phalaenopsis has many positive languages of flower, so giving a phalaenopsis as a gift became established in Japan where luck is important.

In addition, people tend to give a phalaenopsis when someone faces important events because of graceful image, which is probably one of the reasons people love phalaenopsis as a gift.

Don’t you think you want to give something special to someone important starts new life? Why don’t you give someone a phalaenopsis wishing for their good luck? It will make them happy for sure.

7reasons language of Phalaenopsis is popular as a gift

Iris meanings for our good life.

7 methods to present a gift using the violet flower

9 reasons why a pink purse enhance your fortune

9 ways to use biorhythm by destiny number

The seven ways how to order a bouquet due to events

...
Home
How guidance of fortune
7reasons language of Phalaenopsis is popular as a gift