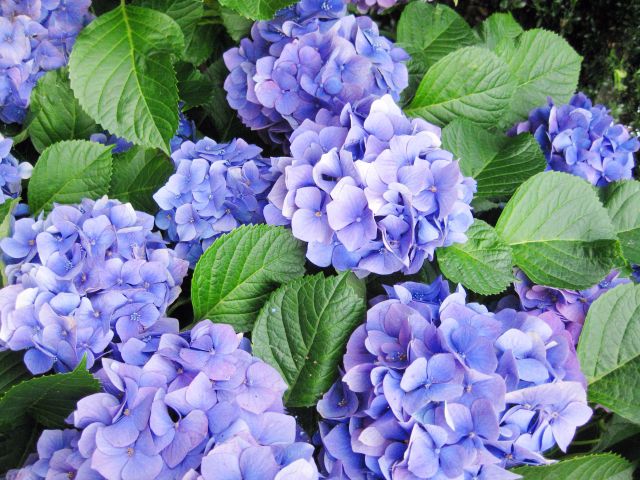 Japan enters its rainy season in June starting from the Western half of the country. The rainy season is really humid, making you feel blue.

During such a depressing period, a refreshing blue hydrangea or a beautiful pink hydrangea can make you feel much better. Actually many people look forward to this season to see the beautiful hydrangea flowers despite the annoying humidity.

Hydrangeas must have really good meanings, for it helps us feel better during this hard season. However, they do not seem to have very good meanings.

You may now be curious about its negative meanings that go against its positive image. So, I will explain the characteristics of this flower and its meaning. Here are the 5 key words.

There are roughly 5 colors of hydrangea: blue, red, white, pink, and purple. The hydrangea is very unique. The colors can change during its lifetime and the quality of the soil can also influence the colors.

There are other factors that determine the color, but only these 2 have been confirmed. So, how does it differ when hydrangea changes its color as it grows and when the soil has some influence?

When the flower blooms, it is at first light green, then becomes white, and finally changes into blue or red. Sometimes, you can see several colors in the same plant. This is because the hydrangea absorbs aluminum ions from the soil through its roots. And the amount of ions will determine the color. It seems that there is no simple explanation for how the color is determined.

The meanings for hydrangea is different from those in the West. In Japan it tends to be described positively because the small flowers are all together helping each other. That is why there are so many good meanings such as “friendship”, “family bonds”, or “peace”.
These meanings come from the Japanese way of thinking that value collaboration. However, the hydrangea does not have only good meanings.

As mentioned earlier, the negative meanings exist in Japan from the Westernized meanings. Now let’s see some of these.

4. Changes in color and bad meanings.

Hydrangeas change their color as it grows. This changes in color are actually called “shichihenge” or 7 transfigurations. Based on this idea of constant change, negative meanings such as “fickleness”, “cheating” or “betrayal” were born.

These changes in color do not give us a good impression, but many people are still attracted by its beauty. It would still be nice to be absorbed in the flower’s charm.

5. Can you give hydrangea as a present?

Since hydrangea has both positive and negative meanings, you should be careful when you give it to someone. Some people only know the negative side of this flower, so it is very important to tell them about the positive meanings. It would be sad to have yourself misunderstood.

If you want to give it to someone old or stubborn, you may want to avoid giving this flower. Also, the hydrangea flower is poisonous. But you can still enjoy it as a decoration. Just be careful not to put a petal in a dish or have someone eat it by accident.

How did you like it? It is important to attach a message to the flowers when you give them to someone because it has completely opposite meanings. Write down the messages of unification or peace when you use them in a wedding ceremony for a married couple.
However, we can also say that it is because of the 7 transfigurations that we can enjoy its beautiful colors.

When you see a hydrangea blooming around a temple or your neighbor’s garden stop and observe it. Your mind will be in peace by looking how the small flowers are so close to one another. Maybe you are the next person to fall in love with the hydrangea.

A Fickle Flower? Hydrangea and its Meanings

1. Azusai and hydrangea.
2. Soil ph. Level and growing pattern influences the color.
3. Meanings in Japan.
4. Changes in color and bad meanings.
5. Can you give hydrangea as a present?

7 messages with the meaning of Dandelion

7 reasons of happier winter with meanings of hollies