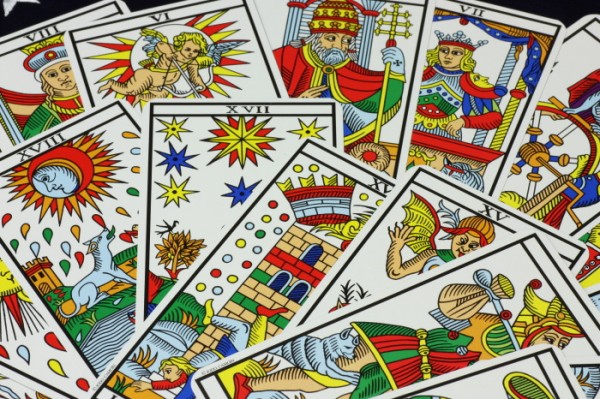 Compared to fortune-telling called “Mei” such as Four Pillars Astrology and Western astrology, the one which has casualness such as I Ching and Tarot card is called “Boku”.
It’s easy to start Boku if you have all the necessary tools. But you won’t be able to understand the meaning of it without any knowledge. So is it not possible to start Tarot card?

Absolutely not! If you understand Tarot card meaning well, it will give you good advice. I’ll introduce 9 things you should know before starting Tarot card.

Thinking about it, you may feel that Tarot card is not so difficult to start. Many Tarot card players say that each deck (a set of Tarot card) has its personality and feature. So if you feel Tarot card close, it will also accept you and the Tarot card meaning will be clearer and easier.

Choice of a deck

Actually, not all Tarot card is the same. There are big 2 versions, Marseille Tarot and Waite Tarot. Numbers of some cards are switched, and some pictures on the cards are different in those versions. Waite Tarot is considered easier for a beginner because the pictures are easy to be understood, and there are a lot of manuals for it.

But there are also some different types in pictures and colors in Waite Tarot. The pictures you like and the ones for fortune-telling are not necessarily the same, so many players have several decks. So get a basic Waite Tarot first, and get another one that you like after you got used to it.

Understand the meaning of pictures

The big reason why you should start with Waite Tarot is because the pictures are easy to understand. But some pictures such as face expressions are different depending on each deck. Therefore, an explanation can be different as well.

Let’s talk about a card of “power”. In Waite Tarot, a woman makes a line open its mouth. However, in Waite compliant Tarot, a woman is in a lion’s mouth using her arms and legs to keep opening it. There are more different versions for the card of “lovers”.

In the card of “a suspended man” I have, the man still doesn’t look philosophical but stunned. It’s very difficult to tell these tiny differences. I think it’s the fastest way to use a deck which you can understand as a manual says.

Major arcane is 22 out of 78 Tarot cards which represent a watershed moment in your life. You can use only these 22 cards for fortune-telling, but the accuracy is lower than using all of 78 cards.

Using only major arcana could lead a wrong explanation, so it’s recommended to use 78 cards from the beginning. Major arcana has a huge story starting with a fool and ending with a universe. Because it was influenced by a Western culture, some pictures imply Christian religion. Understanding these stories is very useful.

In minor arcana, there are 4 suits, which are baton, cup, sword and gold coin. Each of them represents action, emotion, challenge and value of things. Minor arcana is composed by 10 cards of numbers (1-10) and 4 court cards (servant, knight, queen and king). Compared to major arcana which represents a watershed moment in your life, minor arcana represents realistic mattes such as daily things, change of feeling and move of situations.

Court cards are considered to represent people, and they are often explained as a person with a suit feature (sometimes yourself). If you can understand what minor arcana means correctly, the result of the fortune-telling will become more realistic. Major arcana is not enough for daily matters, so it’s the key how you understand minor arcana.

What to do when you get a deck

When you get a deck, take a look at each card. Think about what you feel or imagine from the pictures. It’s your instinct that’s important for Tarot card. You instinct will make your own fortune-telling.

Of course there is a basic explanation of the cards, but it’s often not enough. So your instinct is a important key to learn things from Tarot card.

What to do when you get a manual book

I suppose that many people get a manual book with Tarot card. You can learn the meaning of cards looking into the book, but why don’t you use it in a different way? You learn the meaning with the book first, and think about why the picture means that. This will give you wider knowledge.

Tarot spread is how to place the cards. There are a lot of versions, and some players have their own spread. For a beginner, the spread with less numbers of cards will do first since you can still get a meaningful card with one oracle. Triangle or either-or choice will be good.

Complicated spreads are used for complicated matters. But if the matter of your fortune-telling is too complicated, you should organize your thought first. Especially when you play Tarot card for someone else, understand first what they really want to know.

It’s recommended to make a note after playing Tarot card. You can write down which card you got and how you understood it. Then you can review it later whether it was correct, and if it was not, you can learn how to look for a different understanding. You should write down not only the correct meaning, but also what you learned from the card, how you felt about it and the impression of the whole spread.

Did you find this article useful?

9 ways to resolve your worries with Zen tarrot

7 ways to heal your feeling with free angel cards

What is the healing power of the Angel picture?

7 reasons why angel card reading can brush away cobwebs