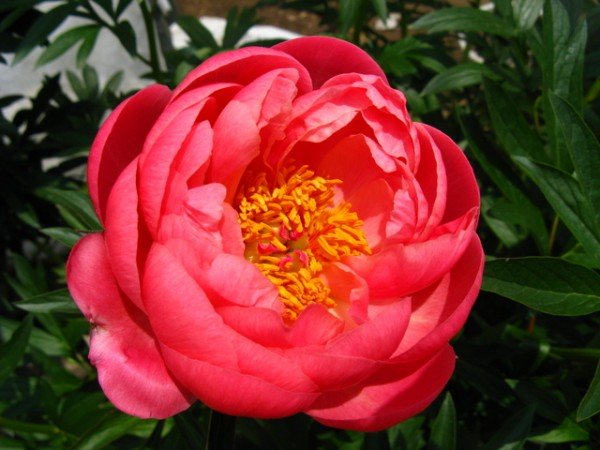 Peony, whose generic term, Paeonia, is named after Paeon, a healer-god, who healed other gods’ wounds in Greek mythology. And the flower is, in Japan, called “shakuyaku,” which drives from “shakuyaku-tari,” an archaic word. Its meaning is “graceful,” and the meaning the flower symbolizes, what you might call “the language of flowers,” is “bashfulness” and “modesty”; additionally “compassion,” and so on, in Western. As for the origins of “bashfulness,” there are various opinions: from an English folklore, in which a shy fairy hid behind the flower, and it blushed in a bashful manner as well; from its characteristic of closing in the evening despite of its generous look; and, from an English idiom “blush like a peony.”

This time, let’s take a look at seven ways to become a graceful woman, learning through the meanings that peony symbolizes.

1. Like a peony – Standing straight with your limbs stretched

Peony, as I have just described, symbolizes “bashfulness” and “modesty” in Japan. This flower, which grows upright, has been likened to the posture of a woman in Japanese clothes since the Edo period. There is a Japanese saying, which is an analogy for a beautiful woman. It goes “Standing style is as shakuyaku (peony), sitting as botan (tree peony), and walking as yuri (lilly).” “Bashfulness” and “modesty” are the keys for women to be praised as a “Yamato Nadeshiko.”

2. Like a peony – A flower much loved by the most beautiful and talented woman

In Japan, a synonym for a beautiful woman is ONO no Komachi, who is admired together with Cleopatra, or Yokihi, a beauty in ancient China. She was also one of the most talented female poets in the early part of Japan’s Heian Period (in the tenth century). Here is a story for generations, which tells us how mesmerizing she was: there was a noble called HUKAKUSA no SHOSHO, who intensely courted her. She found him annoying, so, in order to make him give up on her, told him that if he kept visiting her for one hundred days, she would marry him. He went to see her with great glee night after night, and — alas, on the ninety-ninth night, he froze to death under snow.

3. Wear the scent of peony  Emanate bashfulness and modesty

Shakuyaku smells freshly, like a mixture of rose and herb.

There is a Mediterranean legend of a beautiful nymph named Peony, who was so flattered by the gods that a jealous goddess transformed her into a flower: peony. The perfume characterized by the Peony collection of L’OCCITANE, French natural cosmetic brand, which is loved in Japan as well, is a middle note extracted from raw material of peony, whose different name in Europe is, “the rose that blossoms in May.” The brand name of perfume smells freshly and faintly sweet, which is just associated with bashfulness and modesty.

4. Purity – Listen to another legend around peony

According to Greek mythology, when Leto, a goddess for delivery, gave birth to Zeus’ child, a healer-god named Paeon, alleviated her labor pain with the roots of peony. For that reason he was praised by Zeus. But it made Asclepius so angry. He was another healer-god and Paeon’s former teacher, Finally, Asclepius killed Paeon. Leto lamented his death and made him reborn as a flower: peony. This plant is good for cramps, which bore the legend of purity, another meaning peony embodies.

5. Keep a calm smile on your face – Keep cramps off your body

Shakuyaku is, strictly speaking, translated into English as Chinese peony; botan as tree peony. Above-mentioned saying is, as I said, an analogy for a beautiful woman, but it was, originally, something that told us the effect of each herb. The opening line of the saying, “tateba shakuykaku (standing style is as shakuyaku),” is equivalent to “ki ga tateba shakuyaku wo nomu”: if you get irritate, take shakuyaku, and you will get better.

Peony has been used as Chinese herbal medicine, an infusion of several different types of herbs, in order to alleviate cramps since the ancient times in China and Japan. Herbal medicine made of the roots of peony has a variety of other effects: it has antibacterial effects; it is good for poor circulation and anemia. Peony is a women-friendly plant, as it were.

6. Embellish your room with varied types of peony – Fill your heart with their colorful fluffy petals

There are many varieties of peony: Kojima no Kagayaki is double-flowered; Paula Fay is fragrant and rich pink, taken as semi-ripe cuttings; Coral charm is, just like it sounds, coral pink and double-flowered, which is diurnal, enabling you to enjoy a color alteration; Sarah Bernhardt is a light pink peony with its petals and scent elegant, named after a French actress; Kashoku no Ten is tall, pink-red and double-flowered, whose stems are strong. Embellish your room with peony, and, even if you are in a bad temper, it will make you feel comfortable with its warm and generous heart, which is also one of the meanings the flower symbolizes.

7. Not just outer beauty – But inner charm: bashfulness and modesty

The meanings, bashfulness and modesty, come from its characteristic of opening in the daytime and closing later in the day, as stated earlier. If you want to see the flower blooming beautifully and closing in a bashful manner as night falls, try the following: before arranging the flower, (1) cut its growing point; (2) batter and flatten the same part; shortly the nectar appearing on the surface of the petals, (3) remove it by flushing with water in case that it prevents the flower from opening. This will be fine.

Peony has a lot for women to learn from, as many as the meanings it symbolizes. Embellishing my room with peony and wearing its scent, I want to acquire these meanings so that I can be graceful like the flower. How about you?

Peony is not only beautiful but good for various symptoms. Maybe it has an efficacy to help you become a woman who is both beautiful and talented, just like Ono no Komachi,

Let’s give it a run through.

1. Like a peony – Standing straight with your limbs stretched
2. Like a peony – A flower much loved by the most beautiful and talented woman
3. Wear the scent of peony – Emanate bashfulness and modesty
4. Purity – Listen to another legend around peony
5. Keep a calm smile on your face – Keep cramps off your body
6. Embellish your room with varied types of peony – Fill your heart with their colorful fluffy petals
7. Not just outer beauty – But inner charm: bashfulness and modesty

7 ways to know and avoid men who cheat

7tips How to Choose a Flower Stand for Inauguration

7ways How to Grow love with a Scorpio Personality